Early indications from local authorities estimate over 120,000 people were in attendance on Saturday alone, with final weekend figures to come. In previous years CubaDupa attendance was recorded at 100,000 people over the two days.  The free, two-day festival ran across the weekend of March 27-28 in Wellington, New Zealand and delivered 19+ hours of curated entertainment across 50 stages and creative zones, delivering 500+ performances and 20 parades with over 1750 artists.

Festival Director Gerry Paul said “The team and I are just buzzing! We just feel so lucky to be able to host the most diverse and creative festival in New Zealand, and what we know to be the biggest music and arts festival in the world right now. The streets were pumping, and alive with colours, music, and tantalizing smells from the street feast. If I had to describe it, I would say it’s like Mardi Gras, meets Notting Hill, meets Laneways’ earlier festivals. It’s the busiest we have ever seen CubaDupa, and the atmosphere was electric. The artists, audience, suppliers, vendors – everyone was just smiling ear to ear, dancing and parading through the streets.

CupaDupa’s diverse range of music, art, performers and immersive experiences offered up something for everyone. From the badass beats of Hip Hop Queen JessB, to the ultimate mardi gras party second line all star Richter City Rebels. From face melting riffage at the Valhalla Metal Stage, to the all female fronted line-up on the Garage Project Wild Workshop Stage with genres spanning across folk, indie, acid rock and electronica.

Despite New Zealand’s current border closures, international acts were featured through a handful of locally based artists. Including; American actress & songwriter Chantal Claret, known for her role in the Netflix hit series ‘Love’ and as lead singer in the band Morningwood. Renowned French Singer-Songwriter Franck Monnet and US siblings Deva Mahal, Zoe Moon, and Imon Starr, as the Blues-Reggae band Black Pacific.

The creative zones were a cacophony of colours, costume and imagination. Highlights included the CubaChapel for weddings and faux funerals, the hip shaking Samba HQ at Whistlings Sisters, and the energetically saucy Kāpura circus and cabaret zone. Parades of tubas, batucada dancers, zombies and alien junk monsters took over the streets while onlookers tantalized their taste buds at over 120 local food vendors at the CubaDupa Street Feast.

Ngā Toi o Te Aro stage transformed Aro Park to showcase Māori artists, te reo and tikanga Māori. Interactive Wānanga were held throughout the weekend and the stage featured 32 acts, and 18 hours of programming across the 2 days with the majority of performances in te reo Māori. The Ngā Toi o Te Aro stage was live streamed for the world to tune in to.

With the ever present threat of Covid-19, CubaDupa followed government guidance strictly at the festival. Track and Trace QR codes were highly visible and all attendees were encouraged to sanitize their hands, scan in and stay at home if they felt unwell. Videos of Dr Ashley Bloomfeild boomed through the speaker system with NZ Government Covid-19 hygiene messaging. An additional feature to the festival this year was an activation by the NZ Government Ministry of Health’s official ‘Unite Against COVID-19’ Sani Squad; a team of sanitisation ‘ghostbusters’ who go to festivals wearing Covid-19 QR codes and remind people of good hygiene habits and spraying people’s hands with sanitizer.

Festival Director Gerry Paul said “The support of our community has been unbelievable for the CubaDupa 2021. People have sorely missed it the last couple of years and now we’ve had the chance to get everyone together to celebrate this creative, diverse and buzzy community we live in, we’re all just in our element. We are humbled and grateful for everyone who has supported us. We’ve even had messages of support from international festivals in New Orleans, Canada, Australia, Ireland and the UK. Our thoughts are very much with all of our international whānau and friends, we really appreciate how fortunate we are right now.

CubaDupa was forced to pivot in 2019 to an OFFSTREET version of the festival due to the Christchurch Mosque tragedies, and in 2020 CubaDupa was unable to proceed due to Covid19 lock down restrictions. The triumphant return of CubaDupa in 2021 would not have been possible without the support of the entire Cuba Precinct, the wider Wellington community as well as thousands of artists, suppliers, partners and sponsors. 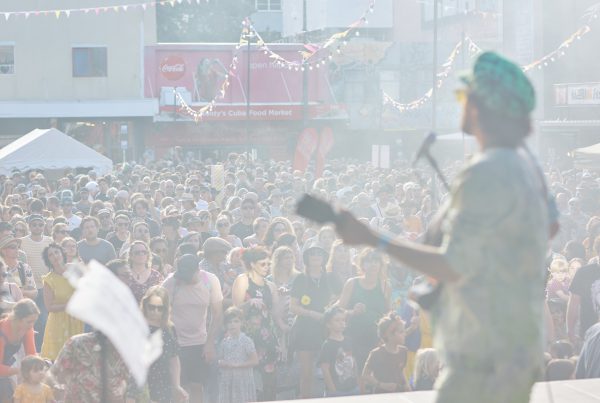